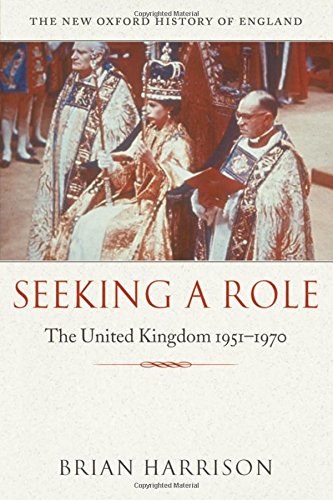 In this, the first of two self-standing volumes bringing The New Oxford History of England up to the present, Brian Harrison begins in 1951 with much of the empire intact and with Britain enjoying high prestige in Europe. The United Kingdom could still then claim to be a great power, whose welfare state exemplified compromise between Soviet planning and the USA>'s free market. When the volume ends in 1970, no such claims carried conviction. The empire had gone, central planning was in trouble, and even the British political system had become controversial. In an unusually wide-ranging, yet impressively detailed volume, Harrison approaches the period from unfamiliar directions. He explains how British politicians in the 1950s and 1960s responded to this transition by pursuing successive roles for Britain: worldwide as champion of freedom, and in Europe as exemplar of parliamentary government, the multi-racial society, and economic planning.
His main focus, though, rests not on the politicians but on the decisions the British people made largely for themselves: on their environment, social structure and attitudes, race relations, family patterns, economic framework, and cultural opportunities. By 1970 the consumer society had supplanted postwar austerity, the socialist vision was fading, and 'the sixties' (the theme of his penultimate chapter) had introduced new and even exotic themes and values. Having lost an empire, Britain was still resourcefully seeking a role: it had yet to find it.