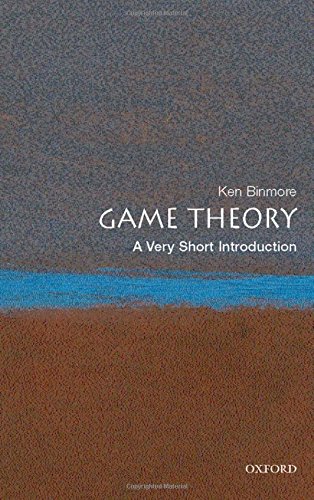 Games are everywhere: Drivers manoeuvring in heavy traffic are playing a driving game. Bargain hunters bidding on eBay are playing an auctioning game. A firm negotiating next year's wage is playing a bargaining game. The opposing candidates in an election are playing a political game. The supermarket's price for corn flakes is decided by playing an economic game. Game theory is about how to play such games in a rational way. Even when the players have not thought everything out in advance, game theory often works for the same reason that mindless animals sometimes end up behaving very cleverly: evolutionary forces eliminate irrational play because it is unfit. Game theory has seen spectacular successes in evolutionary biology and economics, and is beginning to revolutionize other disciplines from psychology to political science. This Very Short Introduction introduces the fascinating world of game theory, showing how it can be understood without mathematical equations, and revealing that everything from how to play poker optimally to the sex ratio among bees can be understood by anyone willing to think seriously about the problem.
ABOUT THE SERIES: The Very Short Introductions series from Oxford University Press contains hundreds of titles in almost every subject area. These pocket-sized books are the perfect way to get ahead in a new subject quickly. Our expert authors combine facts, analysis, perspective, new ideas, and enthusiasm to make interesting and challenging topics highly readable.

Playing for Real: A Text on Game Theor...
KenBinm...

Fun and Games: A Text on Game Theory
KenBinm...