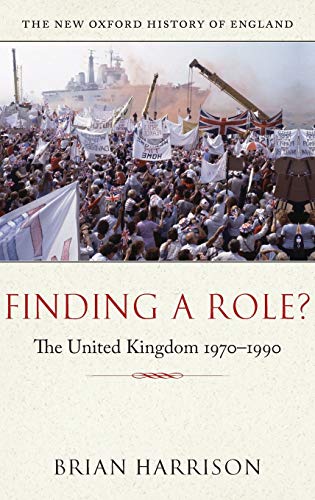 In 1970 the 'cold war' was still cold, Northern Ireland's troubles were escalating, the UK's relations with the EEC were unclear, and corporatist approaches to the economy precariously persisted. By 1990 Communism was crumbling world-wide, Thatcher's economic revolution had occurred, terrorism in Northern Ireland was waning, 'multi-culturalism' was in place, family structures were changing fast, and British political institutions had become controversial. Seven analytic chapters pursue these changes and accumulate rich detail on changes in international relations, landscape and townscape, social framework, family and welfare structures, economic policies and realities, intellect and culture, politics and government. The concluding chapter ranges chronologically even more widely to bring out the interaction of past and present, then asks how far the UK had by 1990 identified its world role. Like Harrison's Seeking a Role: The United Kingdom 1951-1970 (2009) - the immediately preceding volume in this series - Finding a Role? includes a full chronological table and an ample index of names and themes.
This, the first thorough, wide-ranging, and synoptic study of the UK so far published on this period, has two overriding aims: to show how British institutions evolved, but also to illuminate changes in the British people: their hopes and fears, values and enjoyments, failures and achievements. It therefore equips its readers to understand events since 1990, and so to decide for themselves where the UK should now be going.

Finding a Role?: The United Kingdom, 1970-1990 (The New Oxford History of England)を本棚に登録しているひと