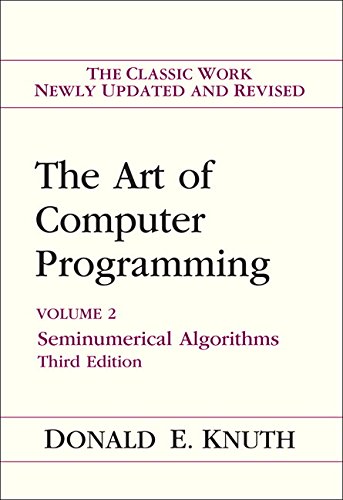 The bible of all fundamental algorithms and the work that taught many of today's software developers most of what they know about computer programming. -Byte, September 1995 I can't begin to tell you how many pleasurable hours of study and recreation they have afforded me! I have pored over them in cars, restaurants, at work, at home...and even at a Little League game when my son wasn't in the line-up. -Charles Long If you think you're a really good programmer...read [Knuth's] Art of Computer Programming...You should definitely send me a resume if you can read the whole thing. -Bill Gates It's always a pleasure when a problem is hard enough that you have to get the Knuths off the shelf. I find that merely opening one has a very useful terrorizing effect on computers. -Jonathan Laventhol The second volume offers a complete introduction to the field of seminumerical algorithms, with separate chapters on random numbers and arithmetic. The book summarizes the major paradigms and basic theory of such algorithms, thereby providing a comprehensive interface between computer programming and numerical analysis.
Particularly noteworthy in this third edition is Knuth's new treatment of random number generators, and his discussion of calculations with formal power series.