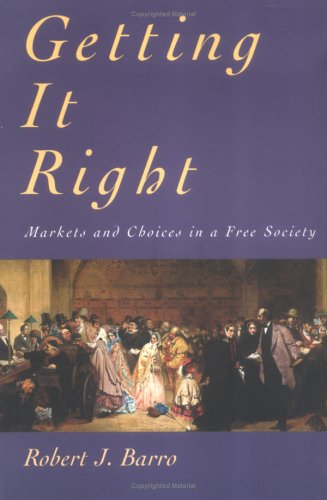 Getting It Right: Markets and Choices in a Free Society (The MIT Press)

Since 1991, Robert Barro has been a lively contributor to the Wall Street Journal and other popular financial media. Getting It Right brings together, updates, and expands upon these writings that showcase Barro's agility in applying economic understanding to a wide array of social issues.Barro, a "conservative who takes no prisoners," and a self-described libertarian, believes that most governments have gone much too far in their spending, taxation, and regulation. The dominant theme in these wide-ranging essays is the importance of institutions that ensure property rights and free markets. The discussion deals especially with the appropriate range of government: which areas represent useful public policy and which are unnecessary interference.The first section of the book considers these questions in the context of the determinants of long-run economic growth. In addition to basic economics, Barro assesses related political topics, such as the role of public institutions, the optimal size of countries, and the consequences of default on foreign debt. The second section deals with the proper role and form of monetary policy.
Barro argues that government should provide markets with a stable nominal framework and then stay out of the way to best allow for price stability.Writings in the third section cover fiscal and other macroeconomic policies. Topics include the distorting influences of taxation, especially taxes on capital income; infrastructure investment and other government spending; and the consequences of public debt and budget deficits. In a final section, Barro looks at more micro issues such as cartels, tax amnesties, school choice, privatization, cigarette-smoking regulation, endangered species regulation, the market for baseball players, and term limits for politicians.