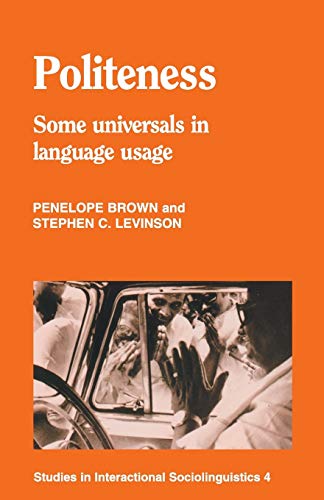 Politeness: Some Universals In Language Usage (Studies in Interactional Sociolinguistics)

This study is about the principles for constructing polite speeches. The core of it first appeared in Questions and Politeness, edited by Esther N. Goody (now out of print). It is here reissued with a fresh introduction that surveys the considerable literature in linguistics, psychology and the social sciences that the original extended essay stimulated, and suggests distinct directions for research. The authors describe and account for some remarkable parallelisms in the linguistic construction of utterances with which people express themselves in different languages and cultures. A motive for these parallels is isolated - politeness, broadly defined to include both polite friendliness and polite formality - and a universal model is constructed outlining the abstract principles underlying polite usages. This is based on the detailed study of three unrelated languages and cultures: the Tamil of South India, the Tzeltal spoken by Mayan Indians in Chiapas, Mexico, and the English of the USA and England, supplemented by examples from other cultures.
Underneath the apparent diversity of polite behaviour in different societies lie some general pan-human principles of social interaction, and the model of politeness provides a tool for analysing the quality of social relations in any society. This volume will be of special interest to students in linguistic pragmatics, sociolinguistics, applied linguistics, anthropology, and the sociology and social psychology of interaction.

Politeness: Some Universals in Languag...
Penelop...

Politeness: Some Universals In Language Usage (Studies in Interactional Sociolinguistics)を本棚に登録しているひと