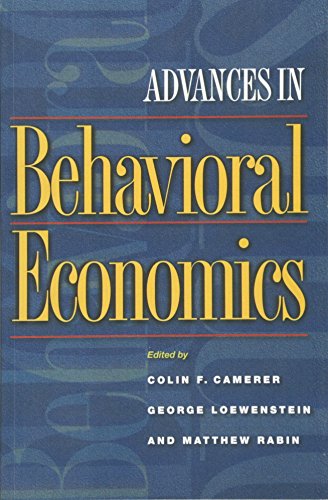 Twenty years ago, behavioral economics did not exist as a field. Most economists were deeply skeptical--even antagonistic--toward the idea of importing insights from psychology into their field. Today, behavioral economics has become virtually mainstream. It is well represented in prominent journals and top economics departments, and behavioral economists, including several contributors to this volume, have garnered some of the most prestigious awards in the profession. This book assembles the most important papers on behavioral economics published since around 1990. Among the 25 articles are many that update and extend earlier foundational contributions, as well as cutting-edge papers that break new theoretical and empirical ground. Advances in Behavioral Economics will serve as the definitive one-volume resource for those who want to familiarize themselves with the new field or keep up-to-date with the latest developments. It will not only be a core text for students, but will be consulted widely by professional economists, as well as psychologists and social scientists with an interest in how behavioral insights are being applied in economics.
The articles, which follow Colin Camerer and George Loewenstein's introduction, are by the editors, George A. Akerlof, Linda Babcock, Shlomo Benartzi, Vincent P. Crawford, Peter Diamond, Ernst Fehr, Robert H. Frank, Shane Frederick, Simon Gchter, David Genesove, Itzhak Gilboa, Uri Gneezy, Robert M. Hutchens, Daniel Kahneman, Jack L. Knetsch, David Laibson, Christopher Mayer, Terrance Odean, Ted O'Donoghue, Aldo Rustichini, David Schmeidler, Klaus M. Schmidt, Eldar Shafir, Hersh M. Shefrin, Chris Starmer, Richard H. Thaler, Amos Tversky, and Janet L. Yellen.