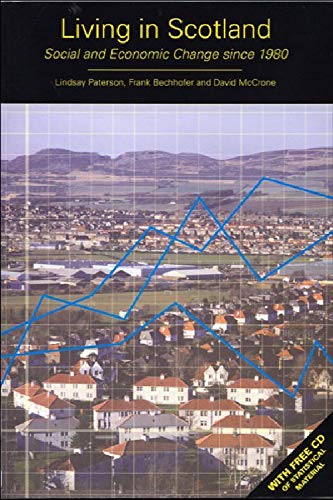 Living in Scotland: Social and Economic Change Since 1980

Shortlisted for the Saltire Society/NLS Scottish Research Book of the Year Award, 2005 Living in Scotland gives an account of the key social changes in Scottish society, describing how it has been transformed over the last two to three decades. Drawing on a uniquely wide range of data from government statistics, social surveys and over-time data sources, the book tells the story of society in Scotland during the approach and arrival of the new century. The authors analyse the large-scale changes which have profoundly altered Scottish society affecting the country's demography, patterns of work and employment, the distributions of income, wealth and poverty, social class and social mobility, educational opportunities, and patterns of consumption and lifestyle. While Scotland shares many of these social trends with similar western societies, its reaction to them is shaped by its own history and culture. The authors argue that Scotland is now a more affluent, comfortable and pleasant place to live in than just two or three decades ago, but that it remains seriously divided and stratified. A significant minority of its people remain disadvantaged and relatively deprived.This represents the major political and cultural challenge for the new Scotland.
Living in Scotland is written by three of the country's foremost sociologists. Together, they build a picture of a changing Scotland at the beginning of the 21st century. Key Features: * A cd-rom of all the key tables is provided with the book * Written by three of Scotland's foremost sociologists * Builds a picture of the changing society of Scotland over the second half of the twentieth century * Uses a uniquely wide range of statistical data sources which are set in context and explained in non-technical ways

Living in Scotland: Social and Economic Change Since 1980を本棚に登録しているひと