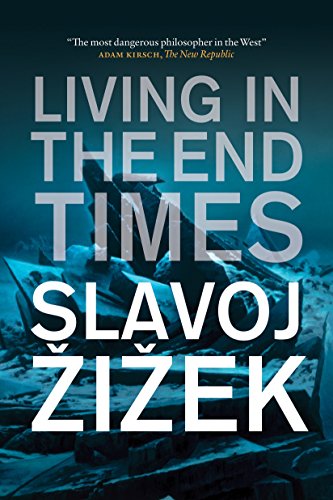 Living in the End Times

The underlying premise of the book is a simple one: the global capitalist system is approaching an apocalyptic zero-point. Its four riders of the apocalypse are the ecological crisis, the consequences of the biogenetic revolution, the imbalances within the system itself (problems with intellectual property, the forthcoming struggle for raw materials, food and water), and the explosions of social divisions and exclusions. Society's first reaction is ideological denial, then explosions of anger at the injustices of the new world order, attempts at bargaining, and when this fails, depression and withdrawal set in. Finally, after passing through this zero-point we no longer perceive it as a threat, but as the chance for a new beginning. Or, as Mao Zedong might have put it, There is great disorder under heaven, the situation is excellent.A" A iA ek traces out in detail these five stances, makes a plea for a return to the Marxian critique of political economy, and sniffs out the first signs of a budding communist culture in all its diverse forms-in utopias that range from Kafka's community of mice to the collective of freak outcasts in the TV series Heroes.

Living in the End Timesを本棚に登録しているひと